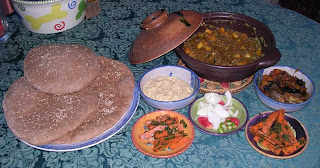 Chutzpah, audacity, brass, gall, and nerve. That's what you need to jump in and try a new style of cooking. Amy had all of the above when she decided to try Moroccan cooking. We have never been to Morocco and knew practically nothing about Moroccan cuisine, but she got a Moroccan cookbook, Cooking Moroccan by Tess Mallos, and jumped in.
The centerpiece of her Moroccan meal was the tagine, a long cooked Moroccan stew. Most tagines have meat, but she was able to find one that was based on lentils and squash. See the recipe here. She also made spiced carrots (recipe here) and roasted vegetables with prunes (recipe here).
Moroccan food emphasizes long, slow cooking or stewing. It uses elaborate spice mixtures, including cinnamon, cumin, coriander, ginger, and turmeric. The spices are combined with onions and/or tomatoes, olives, and salted lemons, or with fruits.
We also had hummus, garnished with hot peppers and onions. Okay, hummus is really more Arabic than Moroccan, but I like it.
Then there was the bread. Moroccan bread is traditionally made in flat loaves with little or no salt. It is traditionally a wild yeast (sourdough) bread. It was a perfect fit for my basic whole wheat, sourdough pita recipe. I made three loaves of different sizes, so we could find out which one we liked best. The loaves puffed up like pita bread, but since this is apparently not in the Moroccan tradition, in later versions I scored or punctured the tops of the loaves to allow steam to escape.
We enjoyed the meal, but decided that it will be more balanced if we add a salad next time.
Amy and I have both incorporated Moroccan food into our cooking. You can, too. See you on the road to Morocco.
Posted by Jim at 9:03 AM